« With the binoculars scanning the last slopes a jewel appeared. The local hunter who accompanied us looked at us thinking that we would reject an imperfect trophy »

He who tries mountain hunting never leaves it again. Why? Well, because a piece of your soul remains up there, on the peaks, where freedom intoxicates everything and sooner or later you return again and again to breathe the true essence of the wild, believe me, it is not forgotten. 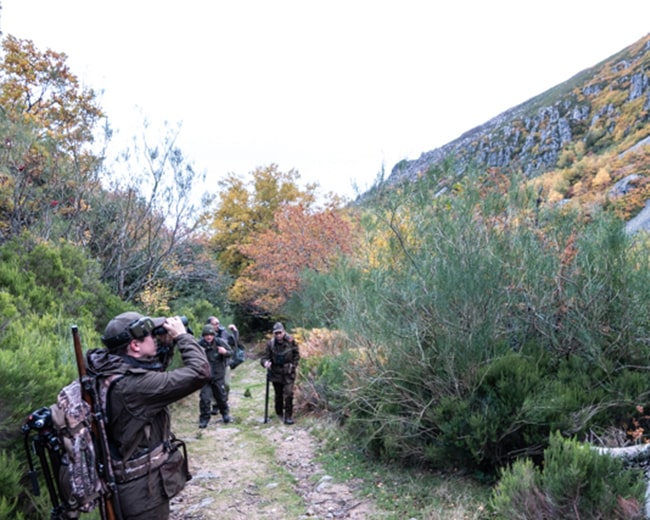 Well, in one of those searches for freedom we go, once again, to the beautiful Ancares from León. We intended to spend three wonderful days among stones and heaths, trying to hunt down one of the animals I like to measure myself with the most, the chamois. However, the weather forecasts were going to make the adventure very difficult, especially after the second day.

Preparing the equipment the previous afternoon I realized the great amount of things and weight that today I carry in my hunting outings, to all the hunting equipment I have added a very complete recording equipment and it is that I can no longer conceive of going outdoor to the mountains without it,  I always need to somehow immortalize my experiences to see them over and over again, it is my way of stealing those precious moments that the mountain gives us dropwise to taste them again and again alone in my studio.

We returned one more year to Los Ancares, one of the best places to hunt down the emblematic Cantabrian chamois. On the way to the mountain, with more enthusiasm than a child on Christmas, we arrived at the beautiful mountains that make up Los Ancares, which, with the extra colors that autumn gave it, created a picture of superlative beauty, the kind that They leave you speechless, of those that cannot be described, imposing. From minute one I am collecting everything that my humble objectives are capable of capturing, without knowing very well what to focus on, since each corner was better than the previous one.

Already with the equipment prepared and the backpacks on our backs, we prepared to climb the mountains through a battered path that put boots and quadriceps to the test perhaps more than necessary until we reached an open where the fog momentarily hid us from a large herd of chamois that stared at us from about 200 meters, we lye downon the ground to hide a silhouette that would be more than suspicious for the usual residents of the mountain. They were a group of females, youngs and some young male already, without hunting pretensions, I recorded everything I could. We were looking for a representative chamois male and seeing this madness so early, it seemed to us that it would not be difficult to find it, nothing is further from the truth. 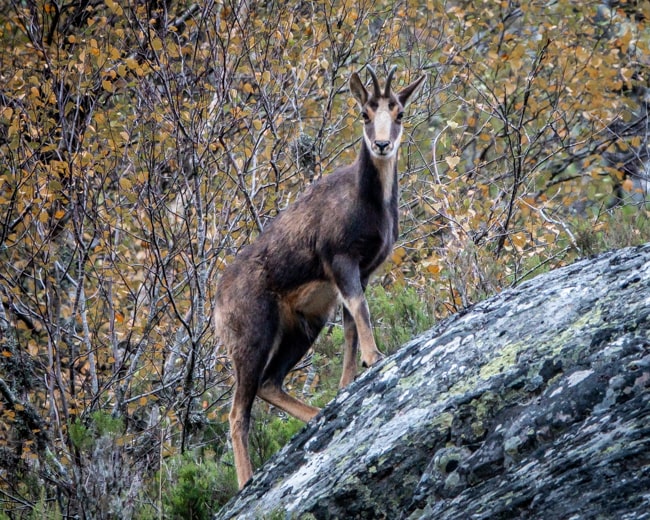 We continued up the mountain along old cattle trails that made the climb a little easier, but without making it comfortable at all. When you submit to a physical effort of this magnitude, you realize that you are not as prepared as you imagined. We were conquering higher and higher peaks to take perspectives that dominated more and more terrain and more slopes, thus discovering beautiful pictures of stones and autumn forests that personally amazed me. A lot of chamois, many chamois, I was recording a lot , but none was what we were looking for until it was time for the sandwich that, Where is it? Well, he stayed in the car. Luckily we had some bags of nuts (something I learned years ago from veteran mountain hunters) and some bags of energy gel that always go in the backpacks just in case.

After this small stop we continue climbing peaks to discover more and more beautiful pictures, and I took advantage of everything I could to take photos that, you should shot it so wrong so that they are not really beautifull. Chamois on the rut, chamois in heat, old females, big males, trophy chamois, chamois with broken horns … nothing we were looking for would deign to appear. We looked at the weather forecasts for the following days to see that they had worsened so much that they were going to make hunting impossible, the pressure increased because we had been hunting for almost 7 hours and the fog began to appear slowly at the same time as the few minutes of light that we they remained, they put more pressure at the moment if possible. 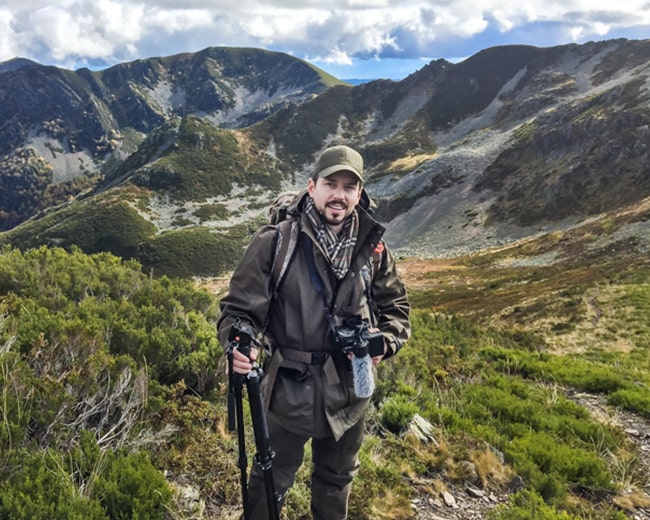 We decided return to the car but we would draw a different route back to try to spend any possibility of sighting that could change our luck in this, already exhausting and demanding day of stalking.

Again more chamois so far away than the telescope brought us closer to check that they were not a possible objective, at the same time, the fog kept coming down and the sun was melting with the horizon … we gave up and started walking, hastening the march well, surely this time , the night would catch us on the mountain.

THE AFTERNOON WAS ITS END …

The afternoon was coming to an end and we decided to return knowing that the following days the weather would prevent us from hunting. We were making stops to rest our legs and have a drink of water,  with the binoculars scanning the last slopes when a jewel appeared in one of them. A chamois with a totally atypical crooked horn that made it a very, very difficult trophy to see … it was far away, and the countryman who accompanied us for a moment looked at us thinking that we would reject an imperfect trophy but he could interpret from the emotion in our smiles, that we would do everything the possible thing to try anapproach in spite of the hour, of the fog and of any others inconvenients, a trophy like this you may not see it again in your life. On going… 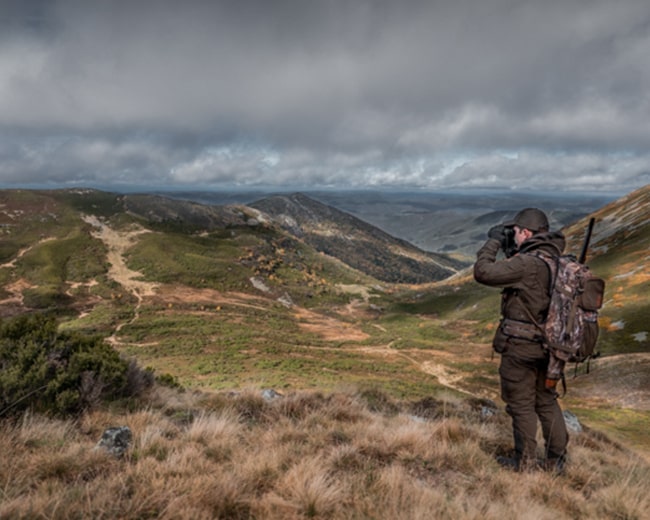 We quickly drew up the strategy and taking the direction of the wind we decided how far we should go to try a shot with guarantees of success, after crossing an impenetrable trough heather and stones impossible to get in less of 250 meters from the chamois, a ‘comfortable’ distance for the .270 Stutzen we were wearing that day.

If the moment of the shot is always tense, with a trophy like that can you imagine?, in all this, the fog was determined to appear in the film, hindering the vision as much as possible. We reached the agreed point, a tree would serve to support the rifle and seek the necessary stability to attempt a shot that was complicated at times, tension, cameras recording …

Have you got it? Yes, shot it whenever you want ». And the .270 breaks the tension with a roar that reverberates between the rocks of that valley, immediately afterwards the chamois jumps that indicates that it is well played, a little low, but carries a lethal shot. We doubled the shot to reach it a second time and thus secure an unrepeatable trophy. In a few seconds the animal collapses from some rocks falling into a dense heath. 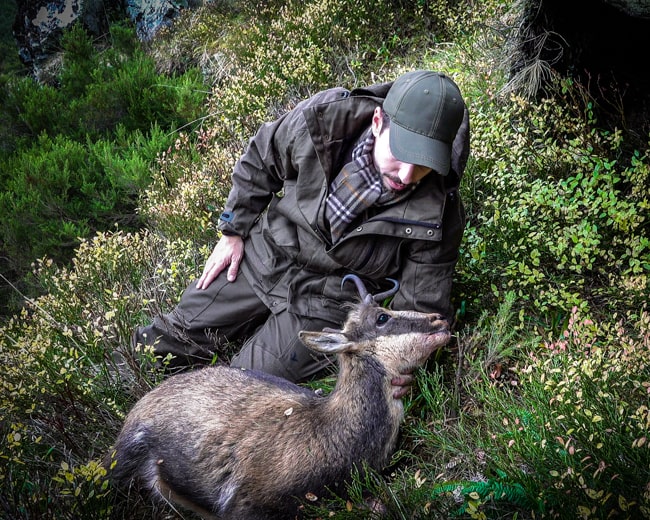 We approached him as fast as we could, as the night was slowly showing his face. What a marvel of an animal, a unique specimen that was chosen to occupy a special place in our memories. Hugs, excitement, illusion, disbelief … that moment that we all know and, also, the joy of having been able to record everything!

Back to the car, with the night well tucked in (and thanks to the fact that I always carry a small flashlight) with a very different face than just an hour ago, we gave ourselves a terrible beating as we had never before given ourselves, our legs sometimes they gave in, the feet were burning and their backs were at the limit, but anyone who saw our faces could say that we came from the best of paradises.

All my respects for you true king of the peaks, you will have my admiration forever, here is my little tribute to immortalize your beautiful shape on video and become eternal not only in my memories but for the rest of those who really appreciate you and value.

Here is the video report with the hope of sharing my experiences with you.

THE LEYEND OF THE BLACK WOLF
Scroll to top
We use cookies to provide you with the best possible experience on our website. By clicking "Accept", you agree to the use of all cookies. In "Cookies Settings" you can decide which cookies you want to allow. You can change these settings at any time by configuring the browser options installed on your computer.
Cookie SettingsAccept
Manage consent