THE MONSTER OF THICKNESS

Today is one of those days that remain in your memory forever, a day engraved with that fire that marks your memories until the rest of your days. Today I was able to get him after many months of struggle. He made a mistake, the only one so far that I was aware of, a small slip perhaps caused by the change of time, and more by chance than by my skill I was able to get hold of him. 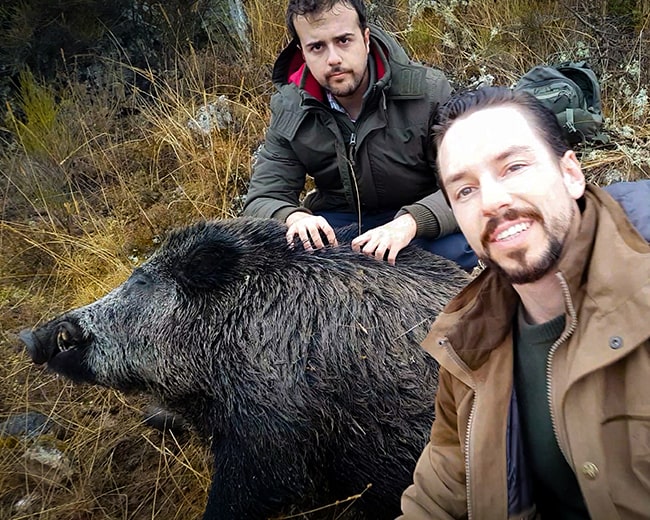 The monster created the legend of him by stabbing dogs and escaping from the hunt stalls with astonishing ease. I began to know him by hearsay, from the stories of the townspeople and I set out to look for him. An impetuous and restless search until I could cut him off when I saw his footprint on an old road, and what a footprint! The work of the forest began, of analysis, of elaboration of theories to locate his bed, their customs, their routines, in short, a new challenge began, one of those that hook to the point of being almost obsessed. Trail cameras, fruitless walks, visits to ponds, many of you will know well what I am talking about.

I started to see his signals it relatively frequently in an old tree that he attended with a cadence between 7 and 20 days and always at untimely hours that thanks to a camera I was able to monitor; 4:50, 6:00, 2:39 (I got to make an Excel table to study it better)… hours for true believers, as I declare myself. And I waited for it, I waited for it many, many times with hardly feeling anything at all.

A CHANGE OF STRATEGY

One day I changed my position because I thought that the monster was lying in bed in a nearby hill and I was controlling up a small riverbank to the famous tree site, since many times it appeared in the photos of the camera bathed and very muddy, which made me suppose that before it happened by the river before. I arrived at 7:30 pm and took off around 12:30 pm without hearing or feeling anything, again. When a few days later I went to see the tree trail camera I could see how that same day that he had been waiting for him on the shore, he had been scratching himself at 22:20, so calm (he had never caught him so soon) damn , for a single time that I change my position the boar enters and soon! maddening.

WHEN YOU LEAST EXPECT IT…

He disappeared again and was no longer seen for about 40 days and so the months went by until he frequented again the area again and I decided wait for him again with renewed faith, NOTHING … I insist again and again and it comes a Sunday, that Sunday, in which my father tells me,  today you are not going to go to try? This boar won’t get into the home to looking for you !!, And more encouraged by him, than by the chances of success, I prepared my old 30-06 stutzen and the waiting backpack heading to the field. I arrived at the site a little later than recommendedbecause the sun had already set over the wide horizon and was coloring the clouds in almost impossible and extremely beautiful tones. 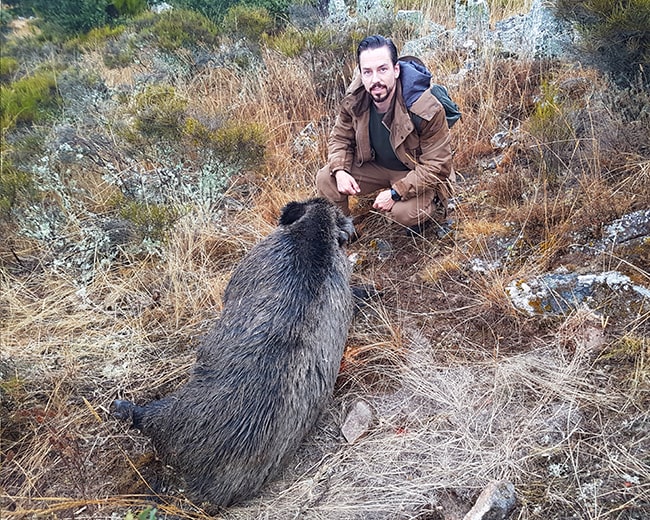 Everything was prepared and, once seated, I relaxed because I expected it to be late when him arrive,  into the night, as always when usually it done, but after just half an hour with the last lights of the day , I hear some acorns chewing very close to me at about 40 meters, I freeze, I hear a few steps in front of me in a holm oak, my eyes open, all my senses are oriented towards the sound source and I raise my binoculars to see with an amazement how a big wild boar lifts the head and sniffing the environment. I CANT BELIEVE IT!!! IS HE. The boar goes straight to the little puddle to relieve his itching while I lower my hands to the rifle that I had resting on my knees, I remove the safety and activate the red dot of the scope just before aim the rifle. The boar begins to scratch itself without further hesitation and I lift the stutzen to contemplate one of the best hunting scenes that any boar hunter can have; a huge boar in the moonlight with the red dot of the scope housed in his body just 30 meters away…. UNDESCRIPTIBLE.

I prepared the rifle and I touched the trigger when a thunderclap broke the magic of a sublime moment to see how that monster runs away without giving any triggering symptoms and I hear how it changes its direction starting its run uphill … Perplexity, amazement, what happened? I stoped hearing it and I got up to go to anxiously check the place of the shot without finding, to my surprise, the slightest drop of blood … round and round to find the slightest hint that will help me to continue believing that I have reached it but nothing, I begin to doubt myself, the rifle, the bullet, the distance, the viewfinder, my nerves, the branches, everything … and I go home with an almost absolute conviction that it I have failed not without the intention of returning tomorrow morning, early to look for something, whatever it is that makes me believe that I have touched it. What a sleepless night, time and time again the blow came to my head, I dreamed of drops of blood, of tracks and stories from those books that teach so much, it goes without saying that I did not sleep. 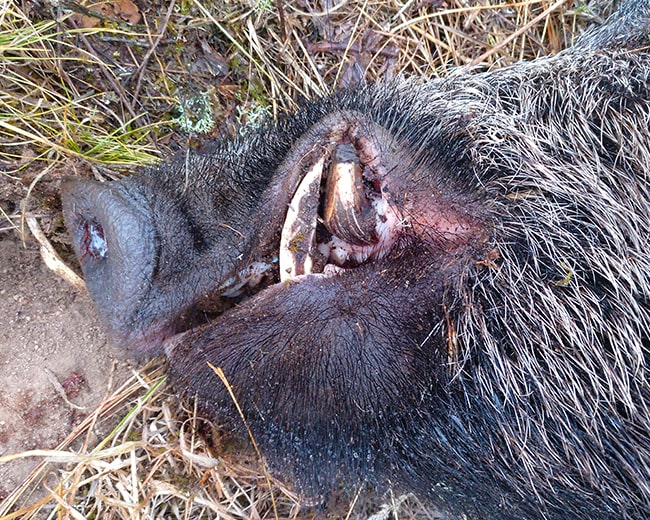 Early the next morning, I called Adri Bma help me with the search and  my little dachshund Lucas also who does too much for what little he knows. Questions, questions, again and again on the way to the mountain. We finally reached and shortly after getting out of the car and approaching the place, an unmistakably boar smell gives us a reality check that makes us look at ourselves and say, IT’S NOT FAR !!! We arrived at the place of the shooting, we reviewed the facts and found absolutely nothing, so we are ready to redo the escape of the monster when, just 70 meters from the shot and after having climbed a small hill, WE SEE IT !!! He had failed to pass a small stone wall and had died making an uphill escape unfit for a well-beaten animal. And what an animal, what a precious individual, what a moment … The taste of a victory based on a prolonged effort is the best of the flavors that a man can experience …

Hugs, photos and more photos to immediately call Francisco Javier Campos Pino in order to see him, help us get him out of there and thus be able to share one of the best moments of my hunting life with friends since without them, the taste would be different. Thanks to both of you!!! For this and for the battles that remain … and thanks to you, great boar, lord of the nights for giving meaning to everything I do and to my way of life, this one that not everyone understands or shares but that they can never take away from me, well God knows that I would bring you back to life if I could, however, you are already immortal in my memory and you will live forever in my memory. Thanks to the Moon of course and to my father for teaching me the best of poisons … and long live the mountain and all those who love it !!!

Here is the video I recorded that day with the hope that it will take you to better worlds for a few minutes.

THE LEYEND OF THE BLACK WOLF

THE STORY OF A UNIQUE DEER
Scroll to top
We use cookies to provide you with the best possible experience on our website. By clicking "Accept", you agree to the use of all cookies. In "Cookies Settings" you can decide which cookies you want to allow. You can change these settings at any time by configuring the browser options installed on your computer.
Cookie SettingsAccept
Manage consent